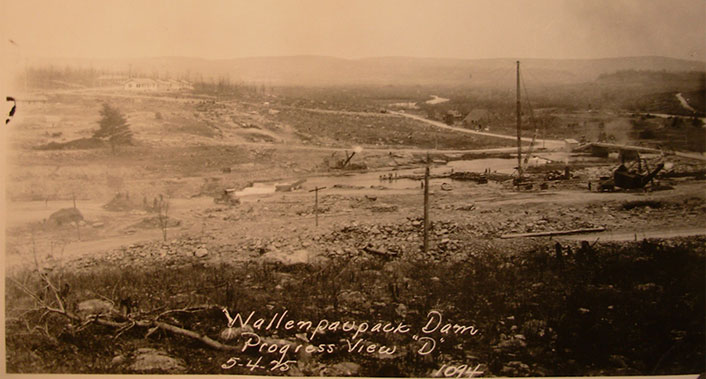 Prior to the 1920’s, Wallenpaupack was only a creek, winding its way through the bowl-like, wooded terrain of what is now Lake Wallenpaupack. The creek was known to the Leni-Lenape Indians as “Wahlinkpapeck” which has been cited as meaning “deep and dark”. The Anglicized version of the word became “Wallenpaupack,” which was translated by early European settlers as “the stream of swift and slow water.” Pennsylvania Power & Light Co. dammed the creek and built the lake in 1926 to supply water for a hydroelectric power plant. Building the lake was a monumental task, considering that mules and steam engines were the only source of power for construction projects in those days. Approximately 2,700 workmen labored for two years on the $1 million project. PPL Corporation owned and managed the lake from its completion until June, 2015. At that time, PPL and Stone Energy Holdings merged to form a new company called Talen Energy. Talen was subsequently required to divest of several generation assets and sold Lake Wallenpaupack to Brookfield Renewable Partners, LLC. Brookfield now owns Lake Wallenpaupack and maintains the hydroelectric generation facilities at the Lake. They also administer the Shoreline Management Policy at Lake Wallenpaupack, just as PPL did for many decades.

In addition to use of the lake for electricity generation, Lake Wallenpaupack quickly became a source of recreation, income, tourism, wildlife, and much more to the people of northeastern Pennsylvania. The Lake Region has relied on tourism and recreation as major economic drivers for many decades. As popularity and awareness of Lake Wallenpaupack increased, so too did our population. Pike and Wayne Counties, the eastern and western shore of the lake, respectively, led the Commonwealth of Pennsylvania in growth for many years. Beginning in the 1960’s and 1970’s, it became apparent that water quality in the lake was deteriorating. In September 1979, Pike and Wayne counties and the 14 townships in the Lake Wallenpaupack watershed, recognizing the value of clean water to the local economy, formed the Lake Wallenpaupack Watershed Management District (LWWMD) to help lead the charge in protecting and improving water quality.  The LWWMD is a 501 (c)(3), nonprofit corporation working with the community to protect water quality in the 219 square-mile Lake Wallenpaupack watershed. It was the first watershed management district in Pennsylvania.